Today I am once again bandaged, in pain, very itchy, and looking extremely unfashionable as evidenced by this photo: 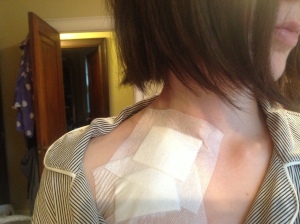 These bandages are covering a fun little device called a port, which was implanted under my skin yesterday during a surgical procedure where I received so many drugs, I was knocked unconscious and now, thankfully, remember nothing. Many people don’t know about ports, or why they’re needed. Well here I am, your friendly cancer patient, to give you the 411.

As mentioned earlier, I have tiny veins. This can make it difficult to get access, and I have the most revolting, grotesque, horrific bruise currently on my arm to illustrate this fun fact. Because of the specific type of cancer I have, I will be receiving chemotherapy, followed by drug infusions, for over a year. That much poking over that much time could cause some serious problems. I wish to avoid these problems. Hence, the port. (I act as if I had any choice in the matter. I had no choice. But I like to pretend that I did.)

The port is a small device that is place near the upper chest under the skin, via an incision. Another incision is made, which is where the tube/catheter is inserted. This tube connects the port to a vein near the neck which ends near the top of the heart. Just typing that out makes me want to vomit. Moving on.

When I receive chemotherapy, drugs, blood draws, etc., they will access the port, which means no more searching for veins in my arms. So technically, this should be a good thing. Today, however, I am not such a fan, as it is causing severe pain all around the surgical site, and into my neck and shoulder. It kind of feels like a gun shot wound, except that I have no idea what that feels like, so I can only assume I must have been some sort of Bonnie and Clyde-type outlaw who was shot, in a former life. Naturally. It is also making it difficult to lift anything with my right arm. I learned today, after attempting to eat spaghetti with my left hand, that ambidexterity is not a skill I will be adding to my resume any time soon.

Because I don’t possess a great deal of fat in my upper body, my port will likely stick out under my skin, and be visible. Since I can’t see it yet, I’m hoping it is not completely hideous. I’d like to think of it like a bio-port from the movie Existenz, which will allow me to enter some exciting virtual reality game. Maybe Jude Law will be there. Maybe we’ll go on thrilling adventures. Maybe it will all have absolutely nothing to do with pumping toxic drugs into my body and making myself ill.

5 thoughts on “My bio-port”

My funny valentines 💕
I think this photo symbolizes what 2020 was for a lot of us: time spent inside, staring through windows, reminiscing about all the things we used to be able to do out there in the before times.
Grateful for this special fam ❤️
Little lion!🦁 Today you are 18 months. And although half birthdays aren't really a thing, we need reasons to celebrate right now so I'm going to celebrate you.🎉