Well folks, we have officially entered the third trimester and I have clearly failed at mommy blogging considering I haven’t blogged at all. Oops. I thought it was time for an update, as I seem to be getting a lot of questions from a lot of interested parties.

After announcing I was pregnant, I was blown away by all the comments and messages from people I don’t even know, those of you who have been following me for years and seem almost to have been waiting for something exciting to happen. I forget sometimes that so many people feel connected to me through my writing, and feel like they know me in a very personal way. It’s bizarre, but also pretty great. Is this how it feels to be Beyonce? I imagine it must be. It’s quite lovely, to feel so much love coming towards this unborn little being. I know that he can feel it, because I can feel it, and we seem to be pretty connected these days due to the wonders of biology and what have you.

For those who are interested in the beginning of the baby journey, I wrote a piece for ELLE Canada last month which you can read here. I think that fills in a lot of the blanks. That also reminds me that I took a photo the night I stopped taking my cancer pills. Let me go look for that…

That was back in September. Sayonara pills, and hello prenatal vitamins! And here is another pic that I took several months later, after winter had come and gone.

I took multiple tests and as each one turned up positive, I still didn’t believe it. I continued to keep testing every day, like a crazy person, and watched as the test lines began to darken. 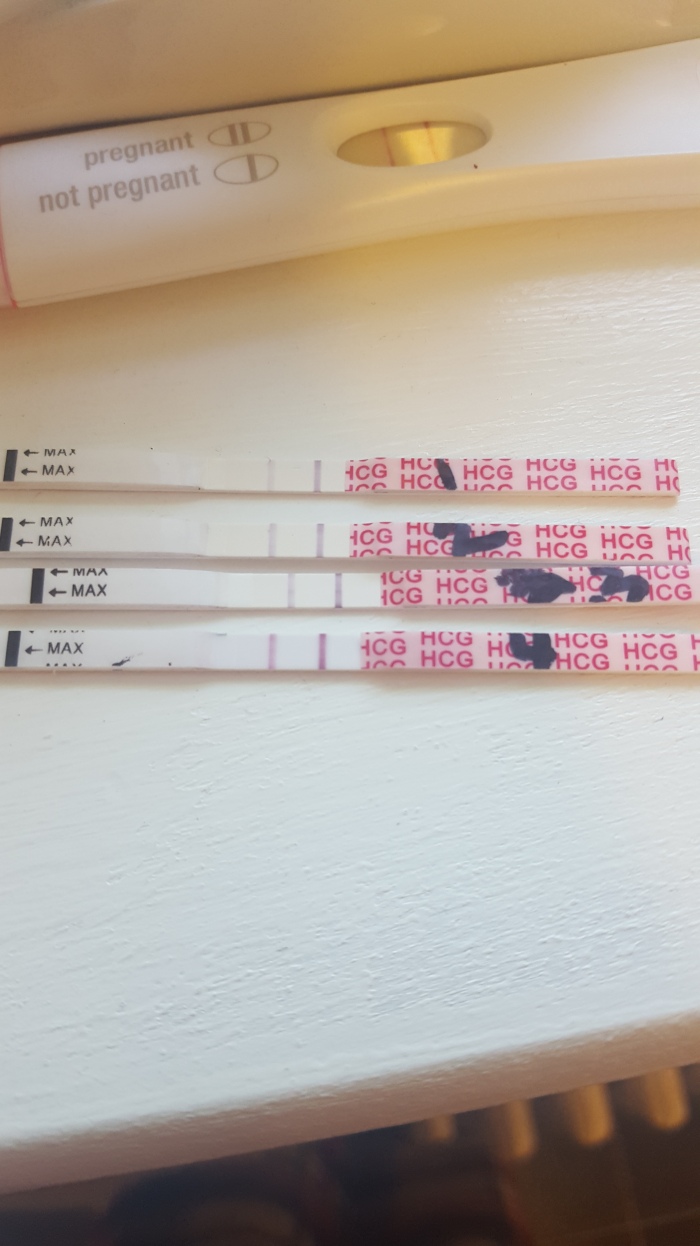 It took me a long time to really believe I was pregnant. It just seemed too good to be true. It still kind of does, but I’ve come to accept that it’s really happening. Or else I’ve just gotten very fat and am possessed by some sort of alien making waves in my stomach, which I suppose is slightly possible, but not too likely. Nope, this baby definitely is coming and I have the hip pain and indigestion to prove it.

So to answer some questions for those who like answers…

I am currently 28 weeks preggers, or in my 29th week. In some ways, it feels like it has gone fast, and in others, I can barely remember what it was like not to have this little guy in my belly. The due date is November 20th. Whether he presents himself early or late is TBD. Sometimes I feel as though he is already trying to escape and then I tell him firmly, YOU MUST STAY IN THERE LITTLE BABY WE ARE NOT READY FOR YOU and he seems to be a decent listener. So November 20 is the target. Feel free to buy him all his presents before then. (Just kidding, all we want is love and good wishes.) (PSYCH, as if, obviously I want presents, do you not know me at all by now?)

Speaking of gifts, you may or may not be aware that Jewish women typically do not have baby showers, although this trend seems to be shifting a bit. But traditionally, it’s not done because of fear of drawing the attention of the evil eye and bad spirits when you celebrate something that isn’t here yet. This is a bummer because I am a big supporter of celebrating this baby, but these age-old superstitions get stuck in your head and ruin a lot of the fun. I’ve felt on-edge most of the entire pregnancy, and having to add Jewish neuroses into the mix doesn’t make it any easier. When my non-Jewish friends talk about how they received everything for their babies at their showers, I feel a bit left out. But I don’t want to upset the Bubbies, so no shower for me… womp womp. It’s okay, there are lots of other great things about being Jewish, like bagels and lox.

Because of these superstitions, some Jewish couples also hold off on buying anything for the baby until he/she is born. No crib, no stroller, no clothes. NOTHING. For someone who needs to plan and prepare, the amount of anxiety around waiting for the birth to purchase a single thing is just too much for me. No thank you. I’ve been holding out as long as possible, but now that we’re starting to countdown the weeks until baby’s arrival, I JUST WANT ALL OF THE THINGS RIGHT NOW. People say, “Babies don’t need anything, just your love, don’t worry!” Ummm yah right. Babies need things. I need things. We both need things and are very excited to get things. I will not let superstition deprive us of the joy of material goods. We’ve already received some gifts and I’ve bought a few sleepers and books and just having these things makes me SO happy. So all that to say, I will compromise with no shower, but still setting up baby’s room before his expected date of arrival. And I feel okay about that conclusion. I assume that the evil spirits are bored with me at this point anyway.

To be honest, the financial costs that come with having a baby have been a big source of stress lately. I keep adding up all the immediate things we need to get and the ongoing things we will need to buy, and future dreams of buying a proper house in a city where it’s impossible to do so, and astronomical daycare fees, car payments, etc. etc., and then I end up wondering why anyone chooses to have children in the first place. It’s kind of a crazy thing to do.

But then the little guy kicks me and I can feel his tiny feet under my hand and I watch him as he wiggles around in there and I think, I would literally give up buying anything for myself ever again and give up anything else in life I ever thought I wanted just to be able to hold this little miracle in my arms and it’s all so worth it because he makes me happier than anything else in the world, and he’s not even here yet. So okay, baby, you win. I will buy you things. Just try not to give me too much ‘tude when you’re a teenager and we’ll call it even.

In terms of how I am feeling physically, which is another popular topic of discussion, I’m feeling pretty great. I’ve had some wicked bad leg cramps, which have left me screaming and crying on more than one occasion and sleeping is no longer enjoyable for me. But otherwise, can’t complain. My belly is getting quite large, and admittedly, I love it. Maybe I won’t so much in a few months when I’m trying to lose it. But for now, I’m lovin’ livin’ large. My entire life I’ve felt like I had to suck my stomach in after having a big meal, and now I get to just push it out and no one knows if it’s baby or bloat and, let me tell you, IT IS AWESOME. What a perk.

I know the next couple months will bring increasing discomfort and I know the actual birthing of the child thing won’t be a walk in the park. But I feel strangely at ease about it all (for now, at least), albeit totally unprepared. I feel like my body has been through so much trauma that it wasn’t meant to endure, and somehow made it through. This time, it’s going through something it was made for, and that just feels a whole lot better. And at the end of it, I will get the greatest prize of all, which seems well worth any temporary pain and agony.

Oh my little baby, you have no idea how excited we are to meet you.